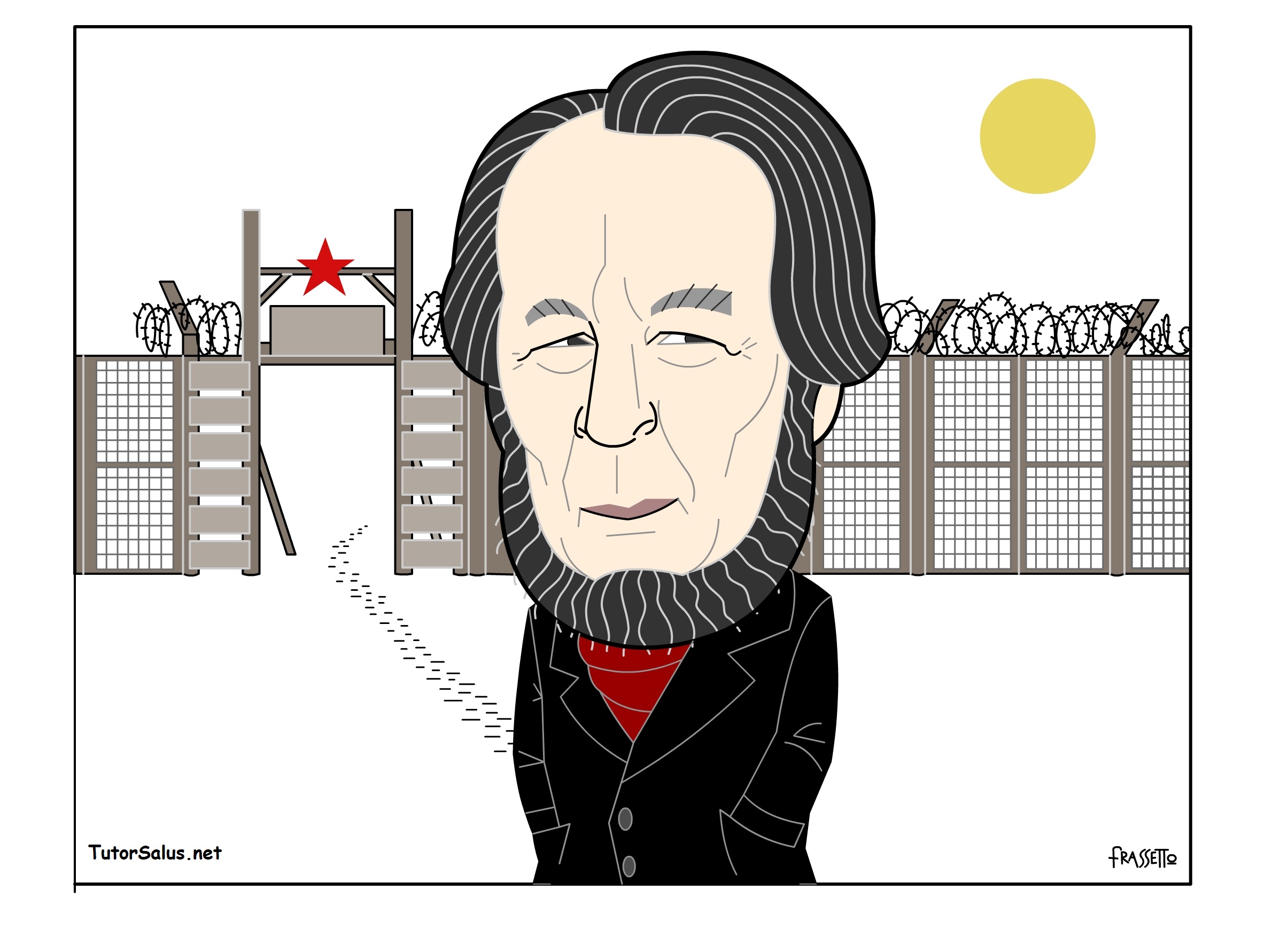 “He (Suchòv, ie) looked up at the sky and gasped; it had cleared and the sun was nearly high enough for dinner-time. Amazing how time flew when you are working. He’d often noticed that days in the camp rolled by before you knew it. Yet your sentence stood still, the time you had to serve never got any less…

Half the day was gone and they’d done nothing. They wouldn’t be paid for rigging up a stove and making themselves a warm shelter : that was work for themselves not for the site. Something would have be entered on the worksheet.”[3]

‘Una giornata di Ivan Denìsovic’ is still the first detailed written description about the life in a Stalinist lagerr also if in the poetic way of a tale, that is a short story : till then, only silent and occasionali hints in literature, due to a formal prohibition to any ex deported people when released, to speak about their experience. Solzenitsin got his freedom in 1953, so that to serve the confinement  for life in a far region of central Asia : in 1959 he will write ‘Una giornata di Ivan Denìsovic’, which was read and diffused underground.

But in 1961, during the XXII Convention of Communist Party of Sovietic Union, the First Secretary Nikita Chruscëv, as formal successor of Iosip Stalin and one of his closest collaborator, does attack Stalin and what he did, while appreciating what Solzenitsin wrote just during Chruscëv debate with ‘conservative’ wing of the Party as contrary to a de-stalinization politics, other than with communist leaders in other countries as they didn’t accept Chruscëv revisionism.

That character - Ivan Denìsovic Sùchov – unfairly imprisoned, as a number of citizens, moved away from his own family and wife he will not see any more as many in the lager did realize, was then so different and also special in some way, nothing to do with that ‘collectivist’ culture which planned to reject the individuals, is still a man so near to anyone read him due to his own lucidity and gentleness : so that it happened the First Secretary did like the diary and decreeded its publishing, infact on November 17, 1962 the manuscript was published on the magazine ‘Novyj Mir’ like an earthquake, because the ‘conservative’ wing pretended to confirm a main proof of system vitality, notwithstanding the evident mistakes by Stalin.

However, a no adherency by Solzenitsin to the ‘socialist realism’[4] as required from government leaders was soon evident, and the ‘not professional’ writer, even if degreed in Mathematics at Rostov University, was considered an incurable antagonist and his further books were rejected up to a compelled exile from his own country.

In 1970 Alexander Solzenitsin had already received the Nobel prize for Literature, he will take back only in 1974, when he was no more URSS citizen, as he well knew that four years before he could be arrested.

What else can we say ? ‘One day in the life of Ivan Denìsovic’ just describes, with the good pleasure of many beloved details, an entire well gone day in the Siberian lager, a few well played chances and other ones just casually happy which tomorrow there wouldn’t be - but today yes! They’ve happened indeed – and mainly with a strong careful calculated awareness that no one illusion can be admitted.

[2]Stefano Frassetto is born in Turin in 1968. After his degree in Architecture at ‘Politecnico’ he begun as graphic novelist for local magazines. In the ‘90s he edited in France too, on ‘Le Réverbère’ and on ‘Libération’ : then he created ‘Ippo’ for ‘Il Giornalino’ and then the stripe ‘35MQ’ for the swiss magazine ‘20 Minuti’. In 2000 he came into ‘La Stampa’ as portraitist for cultural page and the insert ‘Tuttolibri’, then for the weekly ‘Origami’. Today he works also for the swiss magazine ‘Le Temps’.

[4] ‘Socialist realism’ was a cultural movement in Thirties, in Sovietic Union, just to favour a large diffusion of socialist progress.