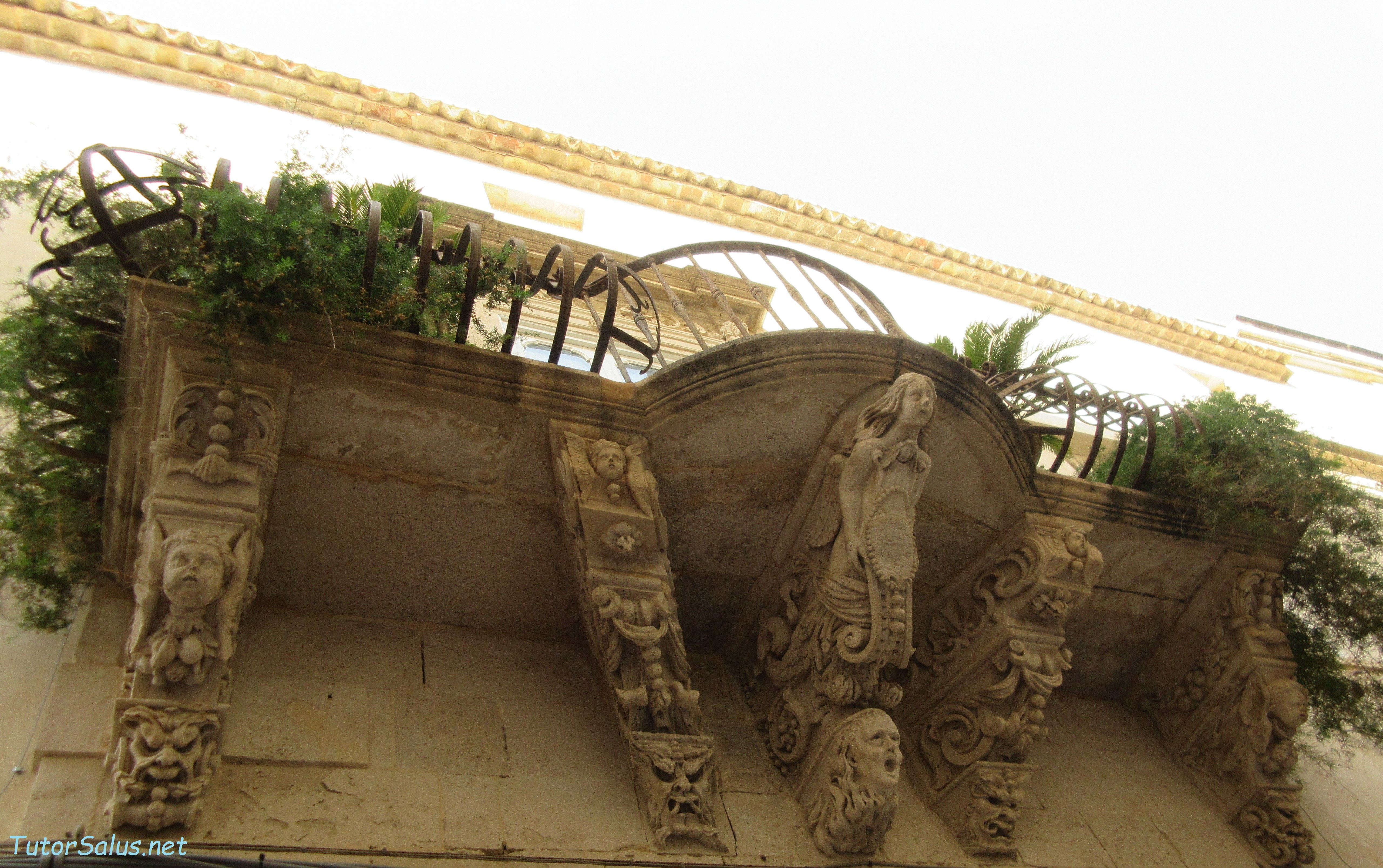 Since ancient times men and women had to face their own anguish : the artistic decorations was one way to play down the load of one's anguish. In the picture : seventeenth century balconies at Ortigia – Siracuse (Sicily, Italy).

“A Psychoanalyst should every time put himself, or herself, a paranoia test.”[2] 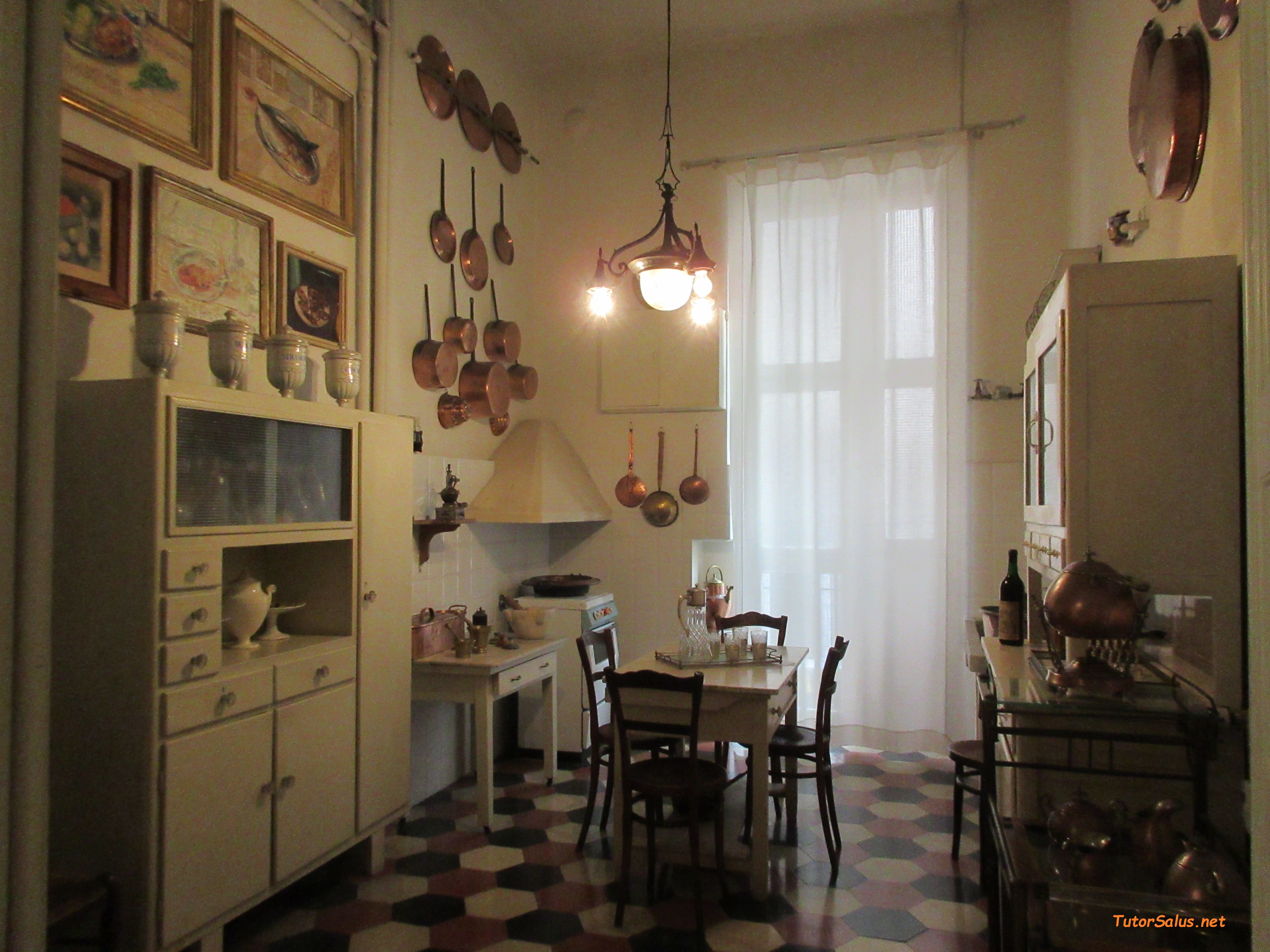 “A psychoanalyst should ask himself a test about quackery every day, even better every session.”[2]

In the air-raid shelters where they were staying during the war, a just twelve years Monica Vitti and her brother were acting sketches, only to spend those hours : but their neighbours in the shelter were listening to both of them and even smiling, notwithstanding everyone was so scared. “I owe my own career to those bombardments…”[2]

A risky statement, and a hinge with other ‘bombardments’, those fearful ones[3] indeed on one’s own uncounscious and which our conscience is charged with : even in some darkest moments of her fourteen years, Monica Vitti does remember how irreplaceable was to realize her talent in playing and be able to face her own conscience.

Years after, she debuted in theater as professional and graduating at Academy[4], playing in the Chorus of ‘Iphigenia in Aulide’ at he Greek theater in Akrai, where every year  - almost contemporary to the theatrical review at the near ‘Ancient theater’ in Siracusa - the ‘Young people Festival’ takes place[5].

Iphigenia – the ancient Greek princess addressed to be sacrificed by her own king-father, Agamemnon, in order to favour the leaving warriors of Achaean, eager to fight at Troy – has been often performed to an audience of very young people : maybe due to Iphigenia unexplained swinging between a dismay for her father decision when she was already promised in marriage with the hero Achilles and, on the opposite, her gradual submission to the sacrifice, in front to an attentive people, she obedient and with the royal behaviour expected by everyone.

But, just when she was being pierced by the executioner’s sword, Iphigenia is replaced by a big doe of the forest which the incredoulous presents see bloodstained and dying on the sacrificial altar of goddess Artemis, instead of the unlucky young woman.

Replacement was then possibile ? Without one’s own identity document, yes of course ! The sole emotions can’t defend ourselves, as a matter of facts : each one of us could realize that.

Here, however, Euripides is telling something more to us – and since 403 a.C., when the tragedy was for the first time performed : if that is the sort of an artless woman, she then will be able to make up for the  abuse of power, as unfortunately we will read in the following ‘Iphigenia in Tauride’, still bearing the signature of Euripides.

The presence of a woman with, or without, her own identity document, was taking again on the stage the acknowledgement of that masochism which Freud named ‘feminine’[6] – not at all specific for woman but spreadly borrowed from women – and which Monica Vitti well performed in a few characters of her long, fairly appreciated, professional career : but also she paying a dear price for that constant coming into and going out in also grotesque, never improbable, characters as acting does impose.

Her uninterrupted recitative speech was evidently a selective one, as first of all addressed to women.

“Different is the nature,

different is the disposition of humans,

but the genuine virtue is always bright”[7].

[1] Monica Vitti, recently died (1931-2022), has been a famous and award-winning actress, also much loved by the public : during the II World War she was little more than a girl.

[2] ‘La mia Guerra’ (1990, Rai 3) has been a television programme in seven episodes, conducted by the journalist Enza Sampò and by the tv screenwriter Leo Benvenuti.

[3] The risk of a ‘return of one’s own repressed thought’ still remains in direct psychotherapies, not in the analytical work. Freud pointed out that, since the beginning of his career. ‘Studi sull’isteria’, J.Breuer-S.Freud (1895) OSF vol.1; ‘La rimozione’, S.Freud (1915) OSF vol.8

[4] Monica Vitti debuted in 1953 with her name at birth, Marisa Ceciarelli, just a little before graduating at the ‘Accademia Nazionale d’Arte Drammatica’ in Rome, established and directed by Silvio d'Amico, who was also her teacher and suggested to choose an ‘art name’ : it was so that she got to the name Monica, she liked, and Vitti with the first part of her mother last name, Vittiglia.

Expo Dubai 2020 experience (October 1, 2021 – March 31, 2022) does involve our ‘Art Academies’ too : the chance of an internationalization can be also a valid opportunity to come out from that ‘implicity’ into which the Arts themselves try to keep our own thinking.

To our sight the main part of communications, and artistic too, does address : even if our sight, to be effective, is asking for a support from listening, more and more then relegated to a didactic and emotional function, rather than confirming as a preferential instrument of decision and direction.

However, listening is the real beginner in each one of us, except afterward getting lazy and almost in tow of human experience : but it remains that nothing gets to be heard if doesn’t become an appointment[1], and right through that individual capability to listen to.

Last December 15, 2021 Roberto Bolle - Italian classic dance pride – has been joining an audition at the ‘Commissione Cultura’ of the ‘Camera dei Deputati’, just while our Government is attending a selection of productive activities able to give economic return on extended funding[2], as required by the well known restrictions due to Covid19 pandemic : the principal dancer spoke with exemplary authority in favour of the ‘Teatro alla Scala’ Academy in Milan https://accademialascala.it  from which he did come from with merit and to which himself was investing for years with evident profit.

On his own he was making an appointment, without using therefore his professional instrument of classic dance where he does excel in the world as well : he made it instead by the excellent and general instrument of human defense, which is the imputative speech[3], so that confirming that irreplaceability in any professional training when it likes to get into a trust-worthy ‘excellency’.[4]

[4] “…culture is not unnecessary : it is in the structure of Italian identity. We have to keep on making our intellectual and works heritage – to be protected and supported – a strong resource, able to produce knowledge, moral enhancement and economic development. It is also a strategic resource for those young people looking at University, Publishing, Arts, Theater, Music, Movie their professional landing, according to their own ambitions.” Cit.:  https://www.quirinale.it/elementi/62272 Message by the President of Repubblica Italiana Sergio Mattarella to the Parliament in his swearing day / February 3, 2022.